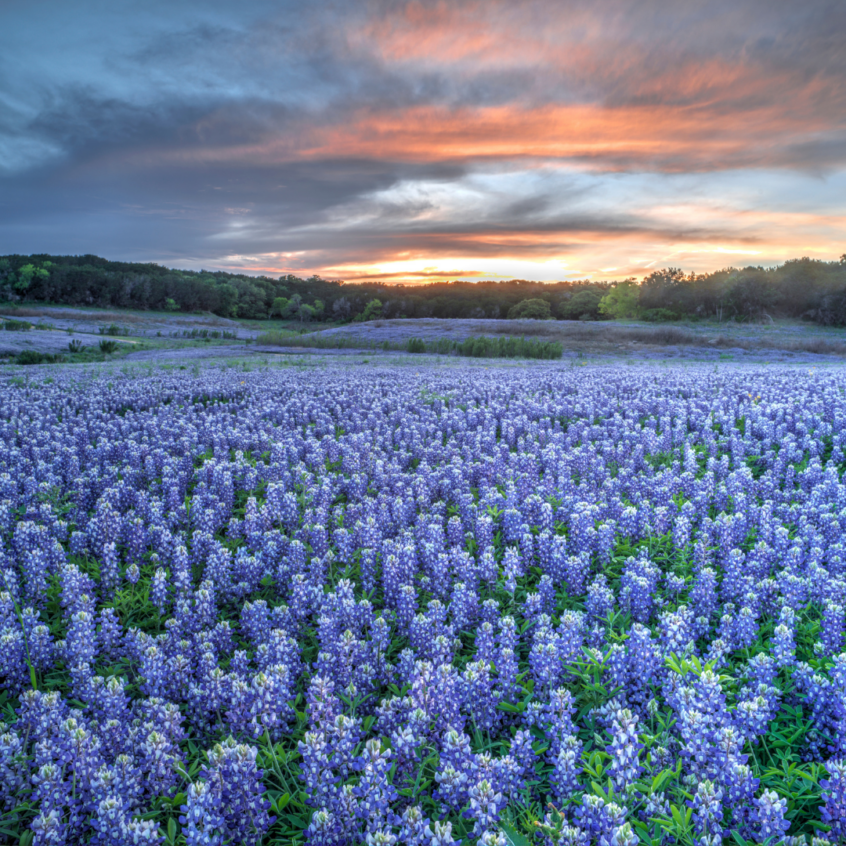 Bluebonnets are Texas’ state flower. The state legislature officially appointed them as such on March 7, 1901. They are covering the sides of roadways and pastures right now. Usually, they are mingled with other wildflowers like Indian paintbrushes and buttercups. Here are some reasons why bluebonnets are a Texas Treasure.

Scientifically, the beloved Bluebonnet is Lupins texensis. They bloom abundantly mid-March through April. The flower needs to go to seed in order to propagate flowers for the next year, which is why Texas postpones mowing along its roadways. The bluebonnet is not just our state flower; it is a symbol of Texas. Historian Jack Macguire said, “The bluebonnet is to Texas what the shamrock is to Ireland, the cherry blossom to Japan, the lily to France, the rose to England and the tulip to Holland.”

Wildflowers were usually the first plant growth to appear when new roads were constructed. Therefore the Highway Department as early as 1930s  devised a plan to encourage wildflower bloom along the roadways. Later Lady Bird Johnson, the wife of President Lyndon B. Johnson, set out in the 1960s to beautify highways. The Highway Beautification Act in 1965 led to the planting of bluebonnets and other wildflowers. Today the Texas Highway Department sows 30,000 pounds of wildflower seeds each year.

Most children in Texas read Tomie dePaola’s, The Legend of the Bluebonnet: An Old Tale of Texas. It tells of a young Comanche girl who sacrificially throws her treasured doll into the fire. She did this to please the Great Spirits in the hopes that they would bring rain to break a drought. It is a beautiful book as is his, The Legend of the Indian Paintbrush: An Old Tale of Wyoming. Even though it is a tale of Wyoming, Texans are also quite familiar with this prolific wildflower.

As fast as they cover our fields, they fade away. Aaron Watson used the state flower to illustrate this fact in his song, Bluebonnets. If you haven’t heard it, it is a great song. We have bluebonnets in the Lake Conroe area, but the more west you go the more you will see. In fact not far away is Chappell Hill. It is considered the “heart of bluebonnet country.” If you are going to head that way, do it this weekend or at least in the near future. You don’t want to miss them. Hopefully now you know a little more why bluebonnets are a Texas Treasure.