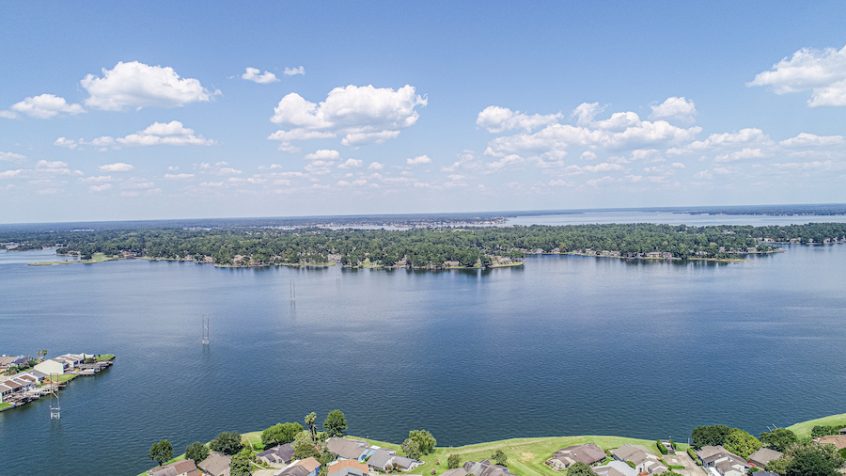 Whether or not to purposely lower the water level for Lake Conroe is a hotly debated issue in 2020 for folks in both Montgomery and Harris counties.  On Thursday, February 20th, the Board of Directors for the San Jacinto River Authority (SJRA) held a hearing in Montgomery County to discuss the issue and make a decision.  Over 1,400 concerned citizens attended the meeting.  They came prepared to voice their support or opposition to the matter.

Citizens supporting the lake levels being lowered for the most part live downstream.  They have experienced flooding in the past mainly from tropical storms and hurricanes.  These residents contend that the lake will act as a reservoir in times of heavy rainfall; therefore, decreasing the water level of the lake will aide in flood control for lower lying areas.  Residents opposing lower water levels typically live on or around Lake Conroe.  Lake Conroe residents are concerned about how the lowering of the lake is affecting the economy, real estate market, property values, safety on the lake, wildlife, and boating to name a few. The concern is that the lake lowering is the wrong solution to the problem and causing more harm than good.

After five hours of deliberation, the SJRA Board of Directors decided in favor of lowering the water levels of Lake Conroe on a seasonal basis.  Therefore beginning on April 1st, they will lower the lake level to create a one foot capacity for any potential water runoff and/or rainfall. This ends May 31st when they will stop the artificial lowering and let the lake fill back up to 201′ if there is enough rain. As hurricane season approaches, during September and October, they will lower the lake 1.5 feet in anticipation of large storms.  This will end on September 1st, and they will again let the lake fill up if we have enough rain.

So what does this mean for you?  If you are a Lake Conroe resident the silver lining is the turnout of the community to oppose this measure after a lethargic response the first time around. This is still supposed to be temporary until further dredging of the San Jacinto River is completed. They also plan to install new flood gates at Lake Houston.  If you live in lower-lying areas downstream in either Montgomery or Harris County you have more help. Lower Lake Conroe water level will offer a little bit more help in the event of a heavy rain can fall.

Regardless of where your opinion lies, there is a silver lining.  People turned out in huge numbers to have their opinion heard.  The communities around Lake Conroe did not sit idly by; they became actively involved.  If you want to be a part of this vibrant, active community, contact me for help with your real estate needs or any questions you have and I’ll be happy to help.