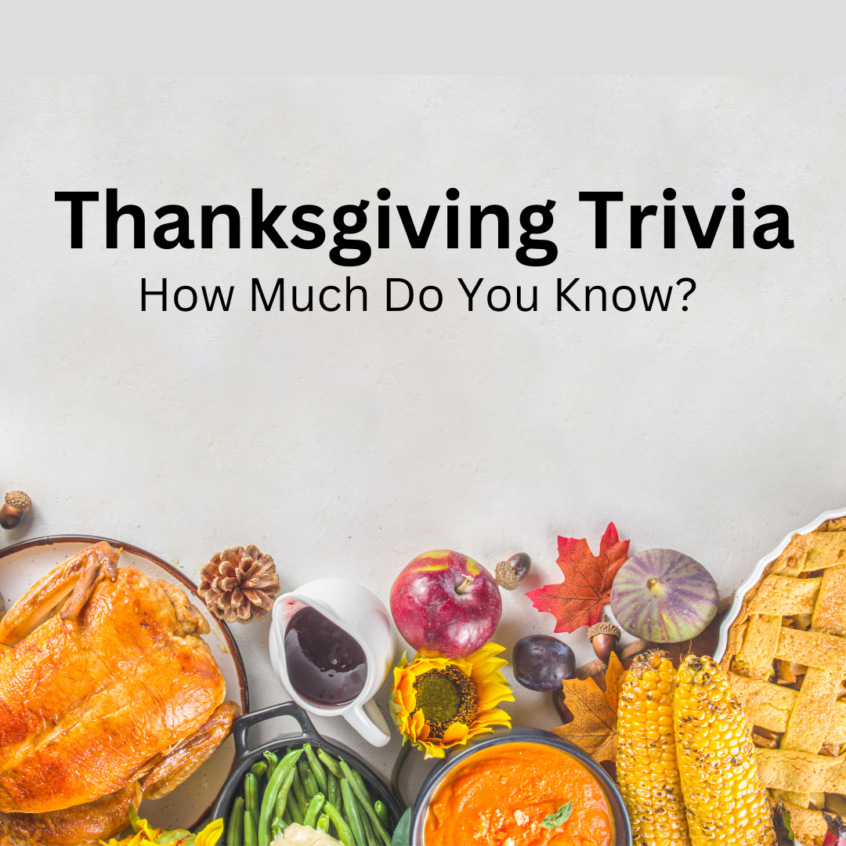 Do you think you know everything about Thanksgiving? Well, let’s test it out with some Thanksgiving trivia.

How many calories does the average American consume on Thanksgiving Day?

The answer may surprise you. The average American consumes 4,500 calories. Wow! That is a lot of food. Take into account that the average calorie consumption per day is 2,000 of women and 2,500 for men. We apparently celebrate our thanksgiving with gluttony. 😂

What is the most popular food served on Thanksgiving?

This one is probably not a surprise. It is turkey. Interestingly, most historians do not believe turkey was served on the first Thanksgiving.

Another interesting fact is that Butterball fields more than 100,000 calls on their Turkey Hotline from home cooks just during November and December. That is a lot of questions!

What are the top five side dishes on Thanksgiving?

According to a poll, the number one side dish is mashed potatoes. Stuffing or dressing follows it by a close second. Then rolls come in in third place. Next are scalloped potatoes. Last but not least in the fifth postion are sweet potatoes or yams. Well, Americans show their love of carbs on Thanksgiving!

What is the most popular dessert on Thanksgiving?

I bet there is really no surprise here. The answer is pumpkin pie. However, sometimes I think people just like an excuse to eat whipped topping. The next most popular pies are sweet potato pie, pecan, and apple.

Which president was the first to officially pardon a turkey?

Even though some presidents did not consume the turkey presented to him by the National Turkey Federation, the first president to officially pardon a turkey was, believe it or not, George H.W. Bush.

An interesting fact is that Richard Nixon sent his gifted turkey to a petting zoo.

Which president made Thanksgiving an official holiday?

Abraham Lincoln made Thanksgiving a national holiday on October 3, 1863. For seventeen years, a woman named Sarah Josepha Hale persistently sent him letters persuading him to do so.

Another interesting fact is that Ms. Hale also wrote, “Mary Had a Little Lamb.” She certainly made her mark in American culture.

When was the original Thanksgiving Day celebration?

Most school children reenact the multi-day celebration in 1621 between the Pilgrims and Wampanaog tribesmen in Plymouth. According to David Barton’s book, The American Story, 90 warriors, plus Chief Massasoit, attended the feast days. In contrast, only 53 pilgrims were still alive and half of them were children. Historians believe that 4 women were alive. It makes me wonder if they had to do all the cooking and cleaning for 144 people. If so, I am sure they were thankful when last meal was served.

Both Texas and Florida claim prior Thanksgiving Day events. So you can be the judge. In what is now Texas near the city of El Paso, a Thanksgiving Day feast was held way back in 1598. Spanish explorer Juan de Onate declared a day of thanksgiving for those who survived a perilous journey. Historians believe over 500 people were present.

In addition another Thanksgiving feast was celebrated in Florida in 1565. A group of 800 Spanish settlers held a feast and invited the indigenous Timucuan tribe to join them. Read about all three events and decide for yourself.

Hopefully you have found this post full of interesting pieces of Thanksgiving trivia. Regardless which group of people celebrated the first official Thanksgiving Day or which foods are the most popular, we should reflect on and give thanks for the abundant ways in which God blesses each of us and our nation. Happy Thanksgiving!