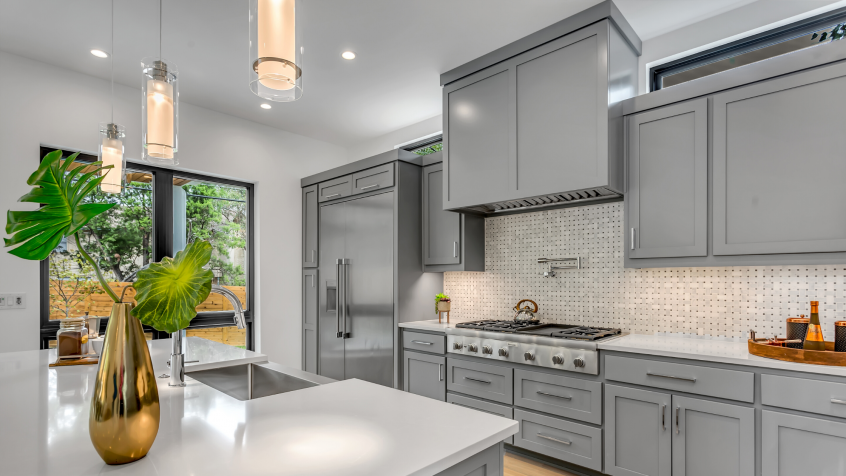 As someone who spends a lot of time each day working in the kitchen, new appliances, new recipes, and new design ideas interest me.  These are all great, but the bones of the kitchen lay the foundation for how effective and efficient your work area will be.  For years, architects, designers, and home cooks have elevated the working triangle principle to the “golden triangle.”  Now there is a new theory in kitchen layout called work zones.  So we will take a look at both principles and you can decide which works best.

This long-standing principle addresses the distance between the stove, refrigerator, and sink.  Looking at the layout of your kitchen you can connect these three areas and measure the distance. Architectural Digest writes, “According to its tenets, each leg of the triangle formed should be between four and nine feet each, and the sum distance of the triangle should not be less than 13 or more than 26 feet.”  Obviously nothing should block the legs of the triangle.  The theory recognizes the home cook’s need to get food from the refrigerator, wash the produce, prep, and cook in a close proximity.  The reason that the areas should not be less than four feet is to prevent bottle-necking, which could happen with more than one person in the kitchen.

This kitchen layout principle definitely provides very efficient work area for a cook. But with larger kitchens being built in open concept home plans, some architects have moved away from the working triangle to the work zones.

This new principle creates different work zones within the kitchen layout.  Think self-contained zones.  For example, you would have a baking zone.  Your mixing bowls, mixer, rolling pins, measuring cups, etc would be in this particular zone. Hammers-n-Hugs narrows down all the possible zones to the most important four, which are the prep zone, the serve zone, the dirty zone, and the clean zone.  You can read more about those particular zones with the above link.

The work zone principle creates areas within your kitchen in which to complete entire tasks. This works best when you have more people in the kitchen working at once.  Theoretically you would have a person working in the one area, which prevents traffic jams in the flow of the kitchen.

If you are designing a kitchen in a new home, remodeling your current kitchen, or just dreaming of your perfect, future kitchen, then thinking through your ultimate design is important.  What are your needs?  Which kitchen style do you prefer?  All these factors play a role.  In the end, which kitchen layout principle works best for you?

I wonder why one cannot have your cake and eat it too?  Why does one principle cancel out the other?  Designing a kitchen paying attention to a good working triangle while creating bona fide work zones within the layout seems possible and smart, especially when considering resale value.  Regardless of your choice, I don’t think you can go wrong in your kitchen layout choice as long as it make sense.