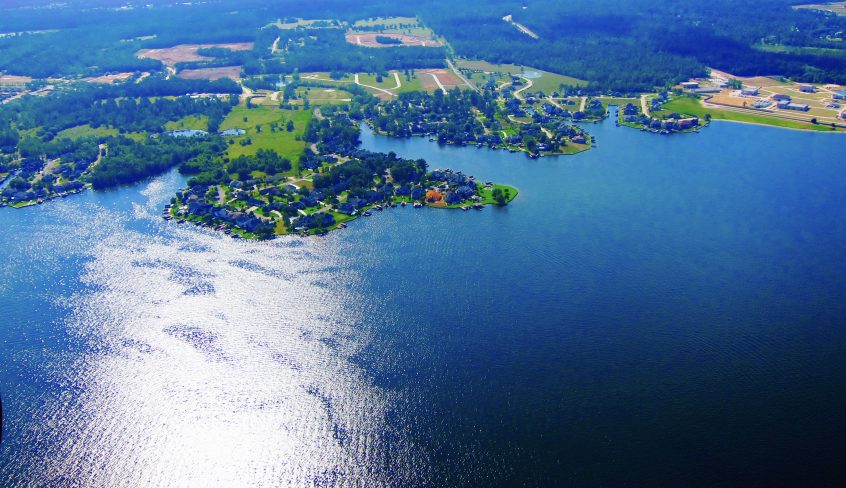 Between the Coronavirus pandemic, rioting, and the political campaigning overwhelming our news, social media feeds, and conversations, other local issues have seemingly disappeared.  However, the SJRA (San Jacinto River Authority) has continued releasing water from Lake Conroe according to their plan.  It is a controversial plan that directly impacts Lake Conroe and Kingwood residents, specifically  with water levels and flood control.

Back in February of this year, members of the SJRA voted to extend their water level dropping plan through December of 2022.  To read more about this decision, check out “Lake Conroe Water Level.”  Many Lake Conroe residents were unhappy with this decision.  They came out in droves to let their voices be heard in April.  Residents of Lake Conroe simply do not want the lake levels to be dropped.  On the other hand, residents down the San Jacinto River believe the drop in water levels will save their homes from flooding due to another hurricane or tropical storm.  Unfortunately, the issue pits residents of different cities against each other.

In July SJRA released a report on the spring lowering of Lake Conroe.  The report begins, “After three months of histrionic, apocalyptic debate about SJRA’s policy of seasonally lowering Lake Conroe, the lowering turned out to be neither the end of the world, nor the salvation of the Lake Houston Area. Simply put, no megastorms tested the policy. So there was no proof that it succeeded or failed.”  Their hyperbolic description of the debate demonstrates how divisive the issue was and still is.  Thankfully no hurricanes have directly impacted the area this season.  However, hurricane season continues through November.  In fact the peak of the season was earlier this week on September 10th.  Therefore, the report seems a little premature.

The SJRA policy will release 199.5 feet in September.  Of course in light of a named storm, the city of Houston can demand an additional 6 inch release.  Fortunately this year we have not had an extreme drought nor an extreme rain event.  Therefore, Lake Conroe’s water levels remain steady, which makes its residents happy.

Since the SJRA plan affects people’s residences, home values, livelihoods, etc. on either side of the debate, it will continue to be a hot button issue for all parties.  It will be interesting to see if a solution will arise to appease everyone.  Until then, we will continue to monitor the situation.